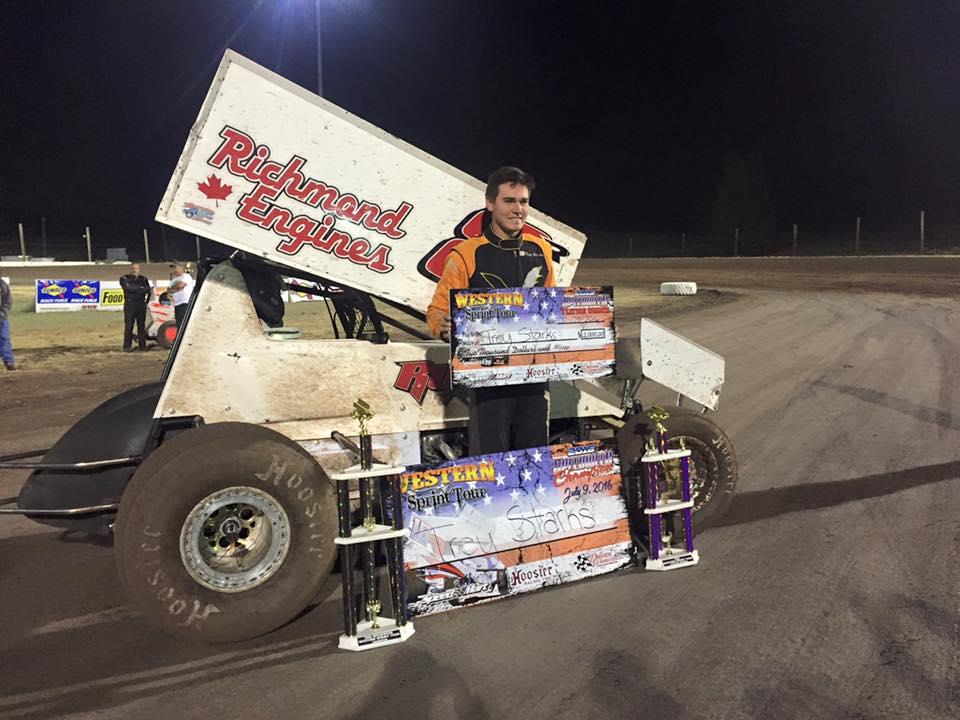 “It was pretty cool to get a win like that, especially at the end of the week and wrapping up the championship,” he said. “Throughout the week we kept getting better and better and growing. Working with (car owner) Doug Rutz and the whole team throughout the week I adapted to the car and that helped.”

The busy week began a week ago Sunday at Sunset Speedway in Banks, Ore., where Starks qualified fifth quickest before he placed fourth in a heat race. That lined him up on the inside of the fourth row for the main event.

“It definitely started pretty rough in Banks,” he said. “We had a few issues and we weren’t able to finish. That started it off on a sour note. It’s a pretty unique track. It’s really small. The conditions weren’t ideal. The track took rubber halfway through qualifying. There wasn’t a ton of passing. We were pretty aggressive on the setup for the main because we were looking to try to win. As the track laid more and more rubber it got worse and worse.”

Starks pulled into the infield in the closing laps because of a part failure and he was credited with a 12th-place result.

Cottage Grove Speedway in Cottage Grove, Ore., hosted Round 2 last Monday. Starks timed in second quickest during qualifying before he rallied from sixth to third place in a heat race. That earned him a spot in the dash, where he advanced from sixth to fifth place.

“Surprisingly, Cottage Grove took rubber so there wasn’t a ton of passing,” he said. “That was a night where you got in line and took what you could get and we ended up with a fifth-place finish in the main event.”

The Rutz team ventured to Willamette Speedway in Lebanon, Ore., on Tuesday. Starks qualified 10th quickest and he ended fourth in a heat race.

“We didn’t have a ton of points so we started 13th in the feature,” he said. “We started trying to pick cars off one at a time. It was a really good race track. You could move around anywhere. Starting that far back it takes a while to run down cars. We needed to start the night better and start further forward.”

Coos Bay Speedway in Coos Bay, Ore., was the site of Speedweek Round 4 on Wednesday. Starks timed in fourth quickest before he charged from fifth to win a heat race. He ended fifth in the dash before picking up one spot in the main event to finish fourth.

“It was a one-lane track on the bottom,” he said. “We tried to be smart in traffic and not give anything up. You had to hit your marks and take what you could get trying to salvage a good finish.”

Round 5 of the Speedweek headed to Siskiyou Motor Speedway in Yreka, Calif., on Friday. Starks set quick time during qualifying before maneuvering from sixth to third place in a heat race and from fourth to second place in the dash.

“We were just a little off in the main event,” he said. “I really wanted to win that one. The track changed a lot. The gearing and engine combination we had wasn’t conducive to good restarts. We were good in traffic and could catch the leader. We had some close calls in traffic. In the end I wasn’t good enough on restarts. That one was a bummer.”

Starks finished second and he headed into the Speedweek finale last Saturday at Southern Oregon Speedway seeking a win. The night opened with the team qualifying third quickest before finishing fourth in a heat race and second in the dash.

“The track got pretty slick early in the night and as soon as the sun went down the moisture came right back,” he said. “We didn’t want to gamble too much on the setup in the main event. We fell back to third on the start, but as soon as traffic came I knew I had to make the right decisions. Traffic was going to be crucial. We ended up getting the lead around Lap 8 or 9. The track was really hooked up and everyone was really tight. You had to be really careful because there were cars bouncing all over the place.”

Starks hustled through the holes and ruts as he led most of the feature en route to his sixth victory of the season.

“I’m so thankful of Doug and the team for the opportunity,” he said. “It was special to end it the way we did.”

Starks will return to Jeff McCall’s sprint car this weekend when he will compete Thursday through Saturday at Eldora Speedway near Rossburg, Ohio, for the 33rd annual Kings Royal with the World of Outlaws Craftsman Sprint Car Series.

Thursday through Saturday at Eldora Speedway near Rossburg, Ohio, for the 33rd annual Kings Royal with the World of Outlaws Craftsman Sprint Car Series

Starks has t-shirts and hoodies for sale at http://www.TreyStarksRacing.com.

Starks Timber Processing is a logging business owned by Trey’s father, John, who is a third-generation logger. It has been based out of Washington for more than 15 years.

“Starks Timber Processing is what provides me the opportunity to race,” Trey said. “It has played a huge role in my life, both on the track and away from it.”
Starks would also like to thank Blue Dot Fabrications, SpeedMart, Security Race Products, King Racing Products and Masco Petroleum for their continued support.