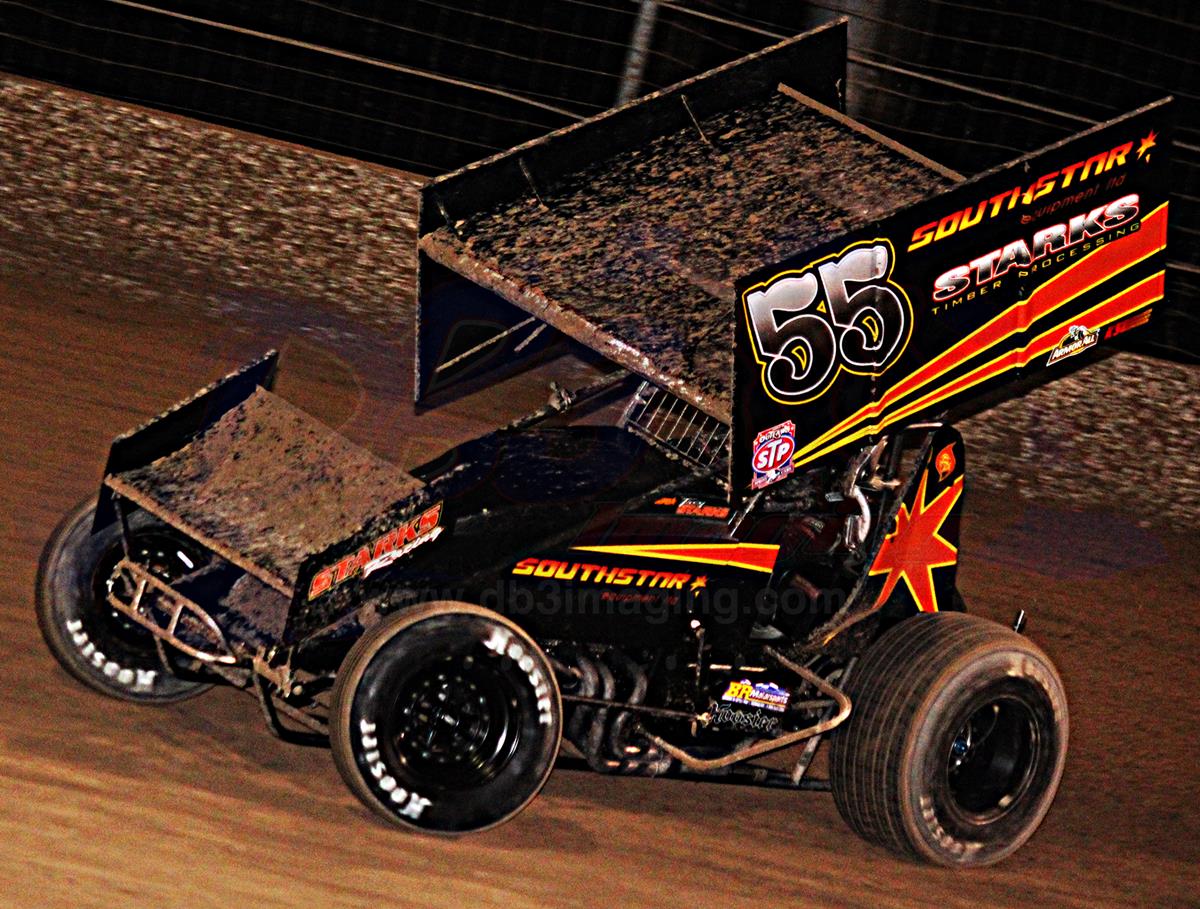 Inside Line Promotions – COTTAGE GROVE, Ore. (July 6, 2014) – Trey Starks rebounded to cap the ASCS Northwest Region Speedweek with a fourth-place finish in the standings for the second straight season.

Starks scored a pair of sixth-place results last Friday and Saturday at Cottage Grove Speedway to wrap up the busy week that included six races in seven days at five different tracks.

“It was a long week,” he said. “It was eventful to say the least. It was way up and down. We learned a lot this week. It was great to finish on a high note.”

After placing 11th during the Speedweek opener a week ago Sunday at Siskiyou Motor Speedway in Yreka, Calif., the event shifted to Oregon on Monday for a race at Southern Oregon Speedway in White City.

Starks won his heat race after starting on the outside of the front row. That gave him enough points to advance into the feature redraw, where he pulled the No. 3 in the random draw to line up on the inside of the second row for the main event.

“The main event was really good,” he said. “We battled for the lead and were running second until about 10 laps to go. I just made a driver mistake in traffic. There were some things we could have done different.”

After spending approximately 20 laps running second, Starks dropped a handful of positions throughout traffic in the closing laps to post a fifth-place finish.

The team tackled Coos Bay Speedway in Coos Bay, Ore., on Tuesday. Starks advanced from fifth to fourth place in his heat race, which earned him enough points to lock into the main event. After starting the feature on the outside of the eighth row, he was caught up in a crash around Lap 5 that relegated him to a 20th-place result.

“I was on the bottom and a sitting duck,” he said. “We got tangled with them. It took out the front end and the wing. It was a deal where the track was tough to pass. You put yourself back there without getting passing points in the heat race. We needed to set ourselves up to end up with a better starting position.”

Starks ventured to Willamette Speedway in Lebanon, Ore., on Wednesday, when he finished where he started – second – in his heat race. That lined him up on the inside of the seventh row for the main event.

“In the first three laps the car could really work the bottom well at that track, which nobody else could,” he said. “We went from 13th to 7th. Then we went to cross from the bottom to the top groove and got stuck in the cushion. We got hit from behind and that bent the drag link.”

The crew changed the bent part during the caution and after he restarted at the back of the field, Starks rallied to end 14th.

Following a day off on Thursday, Cottage Grove Speedway hosted the final two Speedweek races beginning on Friday. Starks maneuvered from seventh to fourth place in his heat race to start the main event on the inside of the sixth row.

“The feature went really well,” he said. “We ran the top in turns one and two, but in turns three and four I could run the top in three and hit the moisture on the bottom coming off turn four. We went from 11th to sixth. I was happy with it.”

The weekend wrapped up on Saturday at the quarter-mile oval, where Starks salvaged a sixth-place finish in his heat race after being caught up in a crash. That started him 11th in the B Main. Starks then rallied to earn the runner-up position and earn a transfer into the main event, which he started 18th.

“We threw some oddball things at it,” he said. “The first couple of laps I was going nowhere. We could not get going. There was a top and a bottom lane and I just could not get going. Then I did a line that would never work in a million years. I would stick to the bottom in turns three and four, but in turns one and two I would go like you were throwing a slider. It was working really well. We passed a bunch of cars.”

“A couple more laps and I would have had fifth and then second, third and fourth place were right there,” he said. “It was a good way to end the week.”

Starks is scheduled to compete this Friday and Saturday at Grays Harbor Raceway in Elma, Wash., for the Summer Thunder Sprint Series.

Friday and Saturday at Grays Harbor Raceway in Elma, Wash., for the Summer Thunder Sprint Series

Starks has t-shirts and hoodies for sale at any race he attends as well as on http://www.TreyStarksRacing.com.

“Blue Dot Fabrications is another business that has been around my family my entire life,” Starks said. “My uncle, Dean, has always been around ready to fix anything that gets dinged up at the track.”